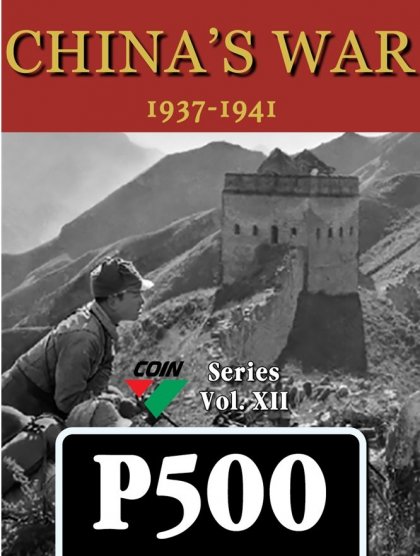 July 8, 1937: a nighttime skirmish at the Marco Polo Bridge near Beijing erupts into an invasion and occupation of China by the Imperial Japanese Army that would not end until 1945. Western sources call it the &ldquo;Second Sino-Japanese War&rdquo;; in China, it is the &ldquo;War of Resistance&rdquo;; and in Japan, it is blandly referred to as &ldquo;the China Incident.&rdquo;&#10;&#10;China&rsquo;s War: 1937-1941 examines the first five years of the conflict, when China stood alone against the Japanese Empire. Each player takes the role of a Faction seeking to attack or defend the Republic of China: the aggressive Japanese, the harried Government (represented by the Nationalist party), the rebellious Chinese Communist Party, or the unruly, fractious Warlords who are obedient when convenient but have their eye on gaining state power.&#10;&#10;Using military, political, and economic actions and exploiting various events, players build and maneuver forces to influence or control the population, extract resources, or otherwise achieve their Faction&rsquo;s aims. A deck of cards regulates turn order, events, victory checks, and other processes. The rules can run non-player Factions, enabling solitaire, 2-player, or multi-player games.&#10;&#10;&mdash;description from the publisher&#10;&#10;