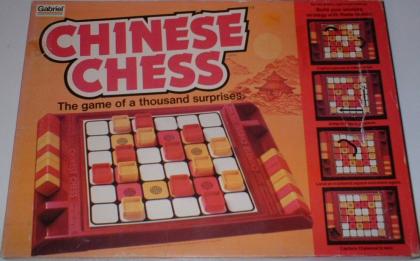 Despite its name, this game has nothing to do with Xiangqi, the *real* Chinese Chess. It does have original mechanics, though.

The pieces start out filling the 6x6 board except for the central 2x2 area. Both players move both sets of pieces; the trick is that one player jumps same-coloured pieces whilst the other jumps different-coloured pieces. Jumped pieces are removed, and the object of the game is to capture 13 pieces.

When you land on same/different-coloured square (there are 12 coloured squares, surrounding the central 2x2 area), you get to go again. Multiple jumps are possible. If you cannot jump, you slide, moving like a rook. Lastly, you cannot move a piece that's just been moved by the opponent.