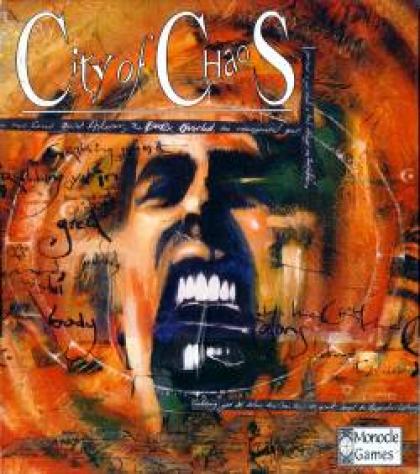 "City of Chaos - The Fantasy Board Game

Travel the twisting, smog-filled streets of Byronitar, "City of Chaos". The City and its inhabitants are in the grip of a strange, entropic forces which threaten to rip the city apart. You must uncover the clues which will lead you to the sources of Chaos, then you must restore Order to the City. In the City anarchy rules, all is in flux, strange beasts and spirits have descended onto the streets, all normality has disappeared. You must learn the ways of the City, train to develop exotic powers, talk, trade and fight your way through the bizarre encounters to free the City. Chaos is unleashed, be prepared!

Worlds Apart
City of Chaos is a break through in board game design. The easy to play rules assue thatwithin minutes you can be exploring Byronitar, "City of Chaos", a richly detailed world in which you will become immersed. City of Chaos uses a random plot and world generator which ensures that no two games are ever alike. You must make the decisions, fight the battles and unravel the dark secrets of this City of Chaos!"

Players explore a randomly generated city seeking clues to uncover a source of the chaos that is afflicting the city and defeat it. Combines many different features:
- Tile Laying: players create the game board by placing tiles
- Random Events: players draw an event card each time they enter a new tile
- Combat: many events result in opponents to fight
- Role Playing: players can improve their characters skills and gain weapons / items to help them
- Paragraph Reading: the plot is uncovered by reading paragraphs out of a book
- Mystery Solving: players must use the clues they read in the paragraphs to determine how to win