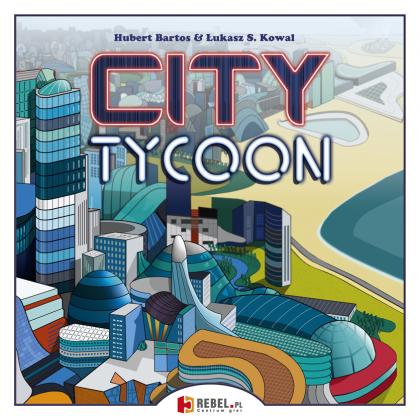 In City Tycoon players assume the role of businessmen investing their own capital in expansion of the city. Their main purpose is to increase the standard of living, and thus the happiness of its citizens. They have within reach a whole range of projects that the city council wants to achieve, but which lack the funds. By skillfully selecting plans, using available space and deciding which projects their money should be spent on they will be expanding the city and competing for the title of the most people-friendly company.

During play, the game board is expanded by players laying down tiles, with each tile representing a piece of the city, a district that might need to be provided with electricity or water in exchange for receiving some benefit. Some of the tiles require a supply of luxury goods; others generate them; others give only points of happiness, such as the hospital.

Resources are common, and each of them can be bought by players from power stations and waterworks. These resources, however, are not unlimited and their use must be well planned. Keep in mind, too, that you must pay opponents when transporting raw materials through districts they own.

Game play in City Tycoon passes through four stages, and in each of them the buildings get larger and more impressive while at the same time requiring more resources and giving better benefits. Players quickly notice the relations between them and may choose several possible strategies to develop their investments, for example, focusing on making money, constructing scoring buildings to the exclusion of all else. Each of these strategies has its pluses and minuses, and the actions of other players might force you to expand in new directions and change your tactic.