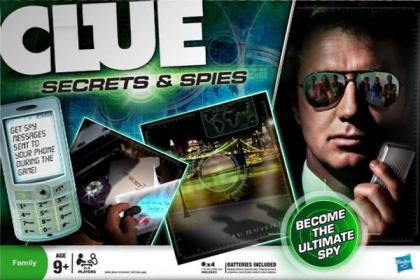 In CLUE: Secrets & Spies Edition, players take the role of a top international spy tasked with infiltrating the Criminal League for Ultimate Espionage to stop its evil scheme for world domination by intercepting the nefarious Agent Black. True identities of Agent Mustard, Agent Scarlet and crew are kept secret as players work independently to complete missions by using clues from the game and real-time tips sent via optional cell phone text messages. The agent who completes the most missions before being discovered by Agent Black will be known as the world’s number one spy and wins the game.