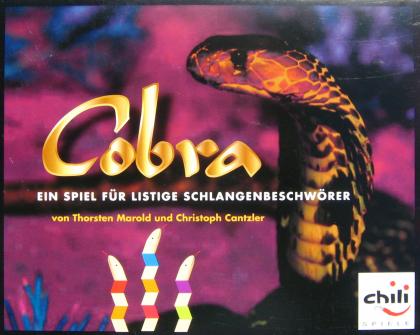 COBRA is a dexterity game with bluffing and tactical elements. There are three baskets, each marked differently. Out of these grow snakes, consisting of alternating neutral and coloured wooden segments.
In the beginning of the game, each player draws randomly one of five colours. On his turn, each player takes one neutral and one coloured segment of his choice and puts them on one of the three snakes.
Aim of the game is to have the highest score in the end - having the most elements of your colour in the "best counting" snake, depending on the basket and the snake`s head. This can pe put on the top of any snake by any player before his regular move, but before this, the others have the chance to make a guess about his colour. If they are right, he MUST discover his colour, thus giving the others an advantage, and is not allowed to move the head. If the guess is wrong, he may put the head on the top of a snake or move it on top of another one.
The game ends, when all players pass or if one of the snakes topples down - the score for the player causing this is zero.
Best to be played in several rounds, adding the scores.