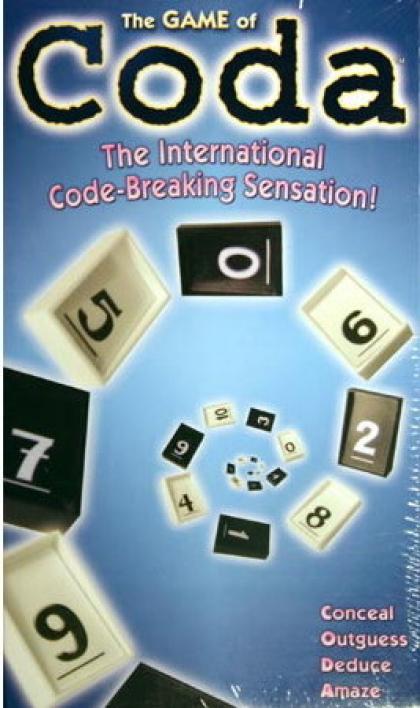 Conceal your secret code, outguess your opponent, deduce the solution, amaze your foes. In the game of CODA players try to crack each other's "code" - a sequence of secret numbers. Guess an opponent's secret number and it is revealed (by knocking it down). Guess incorrectly and you must reveal one of your own secret numbers! On each turn, a new number enters play, which helps you to narrow the possibilities and grow your own code. Common sense, intuition and your "detective" skills will guide you to success.

There are two sets of tiles (similar to Stratego pieces without the soldiers) numbered 0-11. One set is black, one is white. In four player game, everyone one grabs three random pieces and arranges them in numeric order, with white pieces going to the right on ties. In order a player grabs one of the remaining tiles and guesses on of the opponents pieces. If correct, that piece is revealed. If the player is incorrect the piece that was just drawn is placed in the correct place in his own sequence and revealed. If the player was correct in guessing he MAY make another guess. If he chooses not to then he places the picked piece in his code, in sequence, but does not reveal it.

Play continues until only one person has a piece standing. When the new tiles run out, just keep going without drawing tiles.

Belongs to a series / trilogy, containing: