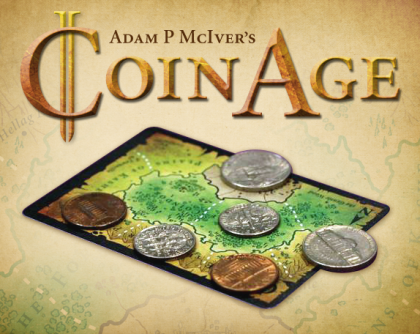 Coin Age is a microgame for two players that's played with a single card and pocket change. Players take turns placing coins on a map to control spaces, outmaneuver their opponent, and score victory points.

Coin Age uses an innovative "coin slap" mechanism to determine available actions. On a player's turn, he takes one of each of his remaining types of coins in hand (one quarter, one nickel, one penny, and one dime), shakes them up, then slaps them on the table. Based on the number of coins that match his "side", he can then either place coins on the map, move previously placed coins to an adjacent space, or remove them altogether. When placing coins, players may also place their coins on top of the opponent's coins if their size/rank is smaller, so while a quarter will give you the most victory points at the end of the game, it has the highest probability of being covered by your opponent.

Coin Age is a quick-playing area control game with lots of player interaction and a bit of push-your-luck gameplay.