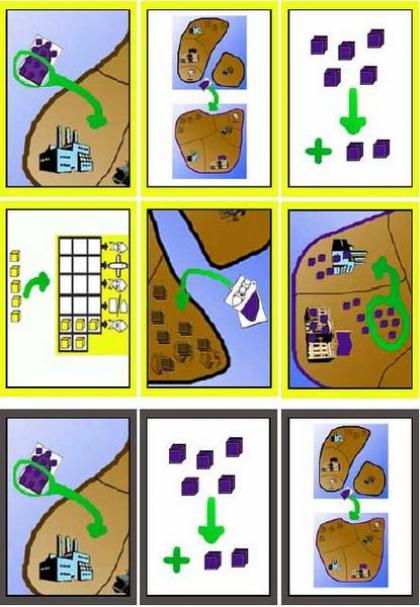 At last, peace breaks out! But, obviously, your previous allies will use the breathing space to re-arm, ally themselves with the enemy and invade us! As the President, it is your sacred duty to beat the other countries to the punch. The time for decisive action is now!

Each player has his own little country map, divided into conceptual areas: political, military, communications, production and population. Each player also has a production card, 60 people tokens, 6 Action cards, 3 ships, 2 carriers and 1 airplane. The players share 30 missile markers (power 5, 15 or 30) and 15 Goal cards.

The Goal cards represent your secret victory conditions (see below). People will eventually spread not only over your own areas but the other players' --giving you a say in each player's destiny as will be seen below.

Play is in rounds, with each round beginning with a Player Order and Political phase, and then a varying number of player turns.

Player Order phase: The order of play is determined by each player's Communications area. Each player counts his people in that area, and each other player with people in that area either adds, subtracts or stays neutral (his choice). Largest score goes first during the round and so on.

Political phase: Place up to four of your six Action cards (keeping at least one), face down, in front of the other players, in any ratio. This phase is resolved in sequence by all players. Next come the individual player turns.

Production phase: Each player's production card is progressively filled up with people markers; the level reached indicates what can be produced. Producing anything, even something way below the current "fill line", empties the card (the people go back to the player's Production area).

Action phase: The player must play one of his Action cards (the ones he kept earlier plus those played on him). Political clout (people in your Political area) can be used to instead lay a card aside for a later round.

These player turns continue until all players pass. The players then recover their Action cards from the discard pile. Cards laid aside during the round are put back in the player's hand --so you may end up with a smaller or larger hand than usual. A player without any people in his Population area, or with less than 5 total people markers on his country (diasporas don't count!) is eliminated.

Goal cards indicate either a player to eliminate (you win even if another player is responsible for your target's elimination) or two players to dominate politically or demographically.

The Action cards are:

Transfer - Transfer up to 5 people of your colour from one area to another, within your country.

Disembark - Up to 5 embarked people on one of your ships off another country's shores disembarks into any area.

Growth - For each 5 people of one colour in your Population area, add two more. Enemies also grow if present.

Production - Move up to 5 people from your Production area into the production display. They may be of another colour if their owner agrees.

Move - You can move one ship of your colour, or one carrier or airplane of a colour you control by one country. Ships and carriers move clockwise or counter-clockwise, airplanes move anywhere.

Shoot - Fire a missile on board a carrier or airplane of a colour you control onto an area of the country where it currently is. The missile kills as many people as its power. The more powerful missiles can spill their effect over into other areas of the target country. Casualties must be fairly spread between the colours present in the area (if it matters).