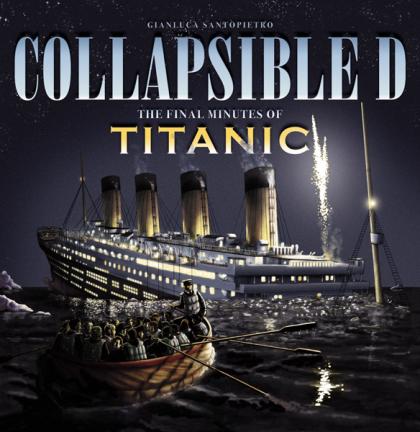 Collapsible D: The Final Minutes of the Titanic

April 14, 1912, 11:40 p.m.: In the dark, cold waters of the Atlantic ocean, the transatlantic RSM Titanic, during its first journey, sinks after a crash against an iceberg. The block of ice opens a hole in the right side of the hull and after two hours and forty minutes the Titanic is doomed.

One hundred years after those happenings, Sir Chester Cobblepot offers a refined board game that celebrates the unforgettable heroism and determination of the passengers on that English transatlantic. More specifically, our main characters are the survivors of the last lifeboat lowered into the water, the collapsible D.

The idea for Collapsible D: The Final Minutes of the Titanic comes from the mind of the Italian author Gianluca Santopietro. In this game the players are on board the Titanic during the night of April 14, 1912, starting at 11:40 p.m. when the ship collides with an iceberg; each turn represents ten minutes in real time. Each player controls a passenger of each Class and a member of the Crew. Each character has a different starting point, an attempt to recreate the exact location where they were on the ship, thanks to historical research led by the author in cooperation with history experts on the Titanic, such as Claudio Bossi. Thanks to an intuitive movement system, players will move their passengers through the ship, trying to reach the lifeboats on the dock.

Meanwhile, the water floods in quickly and the risk of drowning is very high. Each saved passenger grants victory points, and the player with the highest score wins.

Voti e commenti per Collapsible D: The Final Minutes of the Titanic