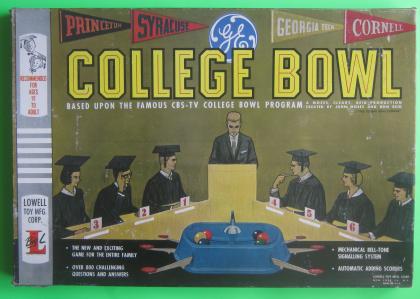 Players separate into two teams. The game master asks a toss up question worth ten points to both teams. The first to give a correct response to the toss up earns a bonus question for that team. Teams are allowed to collaborate on the bonus questions. The team with the most points after twenty minutes is the winner.&#10;&#10;The game is based on a television series.&#10;&#10;Of interest is the device the players use to signal the game master. To signal a player pushes a key on a device that sends a glass marble down a little ramp that hits a little bell.&#10;&#10;