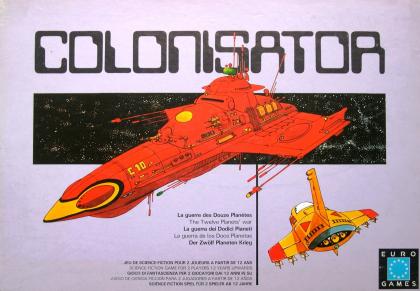 A space war between two races. The goal of the game is colonizing the higher number of planets. The two armies contain the same units, but only a few units are already deployed in the beginning, so a strategical option is to choose which kind of unit are to be produced every turn. Transport ships are the way for the colonization, but they are weak and unarmed... Other units are Fighters, Cruisers, and Mobile Bases.

The first edition published by International Team was Kroll & Prumni; Euro Games cleaned up the rules for Colonisator.

This is your basic two-player SF game of colonization & war.