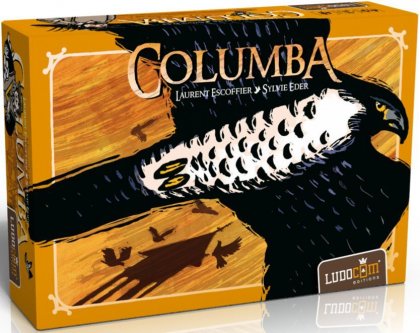 In Columba, you'll build dovecotes, breed pigeons, expand your territory, and &ndash; above all else &ndash; avoid your opponents' falcons. Players start with 2-4 dovecotes depending on the number of players, and they use them during the game to claim flocks as their own. (The larger dovecote doubles the score of the flock claimed.)&#10;&#10;At the start of the game, players need to catch one pigeon of each of the four breeds, after which that goal will be replaced by a new one. The starting player reveals the first tile, places it on the table, then draws another tile and tries to capture pigeons to fulfill his goal. To catch a pigeon, you must place a tile so that it covers the square or squares with the pigeon(s) you need. You may capture pigeons only if you need them; you cannot catch pigeons which belong to a flock already claimed by an opponent, but you can (re)catch pigeons from your or your team's flocks. You receive a tile for each pigeon captured and place those tiles on your goal card.&#10;&#10;When you fill a goal tile, you place the tiles on it on your mat, optionally take a new goal card, play the now-freed goal card, then place the tiles on your mat wherever you wish to make one of your (or your partner's) flocks bigger, provided either of you have already built a dovecote to claim a particular flock as your own.&#10;&#10;You can also use the tiles to breed falcons. You need to discard two of them to get a baby falcon and two more on a subsequent turn to have it grow into an adult falcon that you can then send to prey on your opponents' flock and make it smaller.&#10;&#10;The game ends when no more goal cards can be drawn; any player with an unfulfilled goal card loses four points. Each player counts the tiles or squares forming the flocks claimed by their dovecotes, and the player or team with the highest score wins.&#10;&#10;