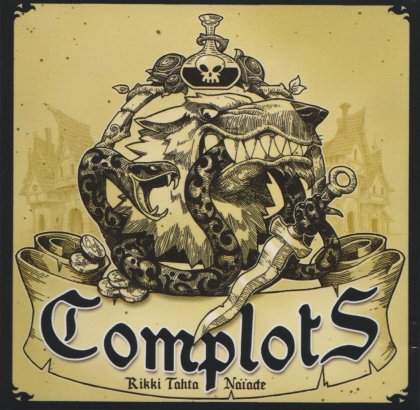 A corrupt city, subject to vice and avarice, is under the control of vile characters. The seat of power is vacant and waiting for you to take it &mdash; unless someone else takes it first.&#10;&#10;In Complots, as in the original game Coup, you control two characters and start with two coins, and through trickery, manipulation and bluffing, you want to eliminate all other players who stand in your way, possibly by having them eliminate one another along the way.&#10;&#10;The 24-card deck includes four copies of six different characters, each with a unique set of powers:&#10;&#10;&#10; Duke: Take three coins from the treasury. Block someone from taking foreign aid.&#10; Assassin: Pay three coins and try to assassinate another player's character.&#10; Contessa: Block an assassination attempt against yourself.&#10; Captain: Take two coins from another player, or block someone from stealing coins from you.&#10; Ambassador: Draw two character cards from the Court (the deck), choose which (if any) to exchange with your face-down characters, then return two. Block someone from stealing coins from you.&#10; Inquisitor: Draw one character card from the deck and choose whether or not to exchange it with one of your face-down characters, or force an opponent to show you one of their character cards (their choice). If you wish, you may then force them to draw a new card from the deck. They then shuffle the old card into the deck. Block someone from stealing coins from you.&#10;&#10;&#10;(Either the Ambassador or the Inquisitor can be used in a game, not both.)&#10;&#10;On your turn, you can take any of the actions listed above, regardless of which characters you actually have in front of you, or you can take one of three other actions:&#10;&#10;&#10; Income: Take one coin from the treasury.&#10; Foreign aid: Take two coins from the treasury.&#10; Coup: Pay seven coins and launch a coup against an opponent, forcing that player to lose an character. (If you have ten coins or more, you must take this action.)&#10;&#10;&#10;When you take one of the character actions &ndash; whether actively on your turn, or defensively in response to someone else's action &ndash; that character's action automatically succeeds unless an opponent challenges you. In this case, if you can't (or don't) reveal the appropriate character, you lose an influence, turning one of your characters face-up. Face-up characters cannot be used, and if both of your characters are face-up, you're out of the game.&#10;&#10;If you do have the character in question and choose to reveal it, the opponent loses a character of their own, then you shuffle that character into the deck and draw a new one, perhaps getting the same character again and perhaps not.&#10;&#10;The last player to still have a face-down character wins the game!&#10;&#10;