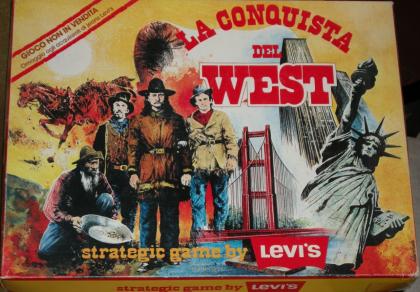 La conquista del West is a simple strategy game that simulates the massive move towards the Far West.

The game is played by throwing a coin to get "heads" or "tails" and follow the rules listed. At his turn, each player flips a coin 2 times and makes the following actions:
- move his pawn one space for each "heads"
- placement of an obstacle (versus other players) for each "tails".
Some hexagons give the possibility to pick up a card and to make an extra action.

The goal of the game is to be the first player to reach any of the four hexagons marked with the logo Levi's, located in the fort or in the mine.

La conquista del West was a promotional game by Levi's and the was not commercially sold.