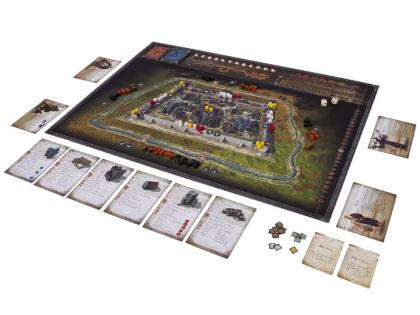 The Convicted is a cooperative board game for 1-4 players. Fight for survival in a hostile land, expand your town and stand ground against continuous surge of enemies!

In The Convicted players become convicts who were given a second chance to expiate their crimes. In order to prove their devotion, they need to colonize new lands in the name of the king. They start building their headquarters – town – with just a handful of footman, and a few structures. Through the development of fortifications, buildings, researching new technologies, gathering resources and training recruits they can transform their colony into an impenetrable fortress. Alas, the new world is full of indigenous inhabitants who by any means possible try to get rid of unwanted colonizers. Countless hordes of barbarians, forest people, ferocious monsters and wolf men with their beasts and war machines will spare no effort to storm the town and its defenders. The whole game-play consists of a campaign of 20 turns, ~45 minutes each (15 hours total). The use of random opponent selections and attack directions makes each game a unique experience.