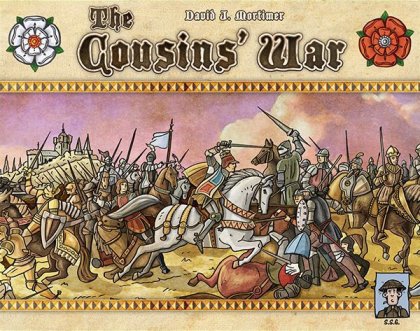 The Wars of the Roses were fought between the Houses of York and Lancaster for over three decades during the 15th century in England. The houses were both branches of the royal family, therefore the Wars were originally known as &quot;The Cousins' War&quot;. Each player represents one of the houses as they fight battles and gain influence to control England.&#10;&#10;The Cousins' War is played over a maximum of five rounds, with each round representing between five and ten years of the conflict. Each round involves gaining influence across England and preparing for a climactic battle.&#10;&#10;In each round, the players decide where the current battlefield will be, playing action cards to deploy troops to the battlefield, while also increasing or decreasing their influence in the regions, after which they fight. Players resolve the battle by engaging in bluff and counter-bluff, using three dice, until only one side has troops remaining on the field. Winning the battle helps to consolidate your house's influence on the board.&#10;&#10;You win The Cousins' War either by dominating all the regions of England or by controlling the most regions at the end of the fifth round.&#10;&#10;Two promo cards are included in each copy of The Cousins' War: Guilds of London: The Secret Guild of Guildsmen and Snowdonia: Supply Wagon/Cannon&#10;&#10;