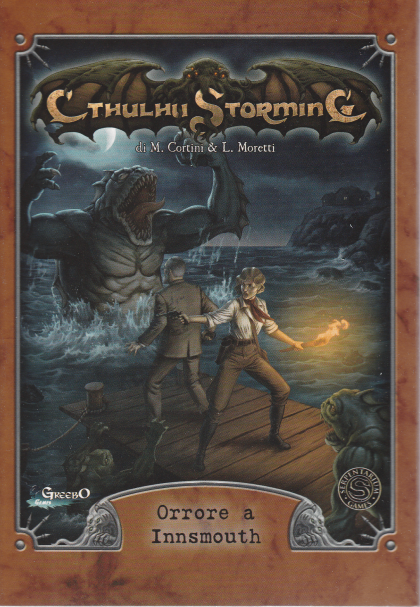 A collaborative game for two players or solo. It can be played with three or four players by combining the two sets of Cthulhu Storming!&#10;&#10;The citizen of Newburyport are missing from their houses, therefore an archaeologist and a psychoanalyst go to investigate in the near village of Innsmouth, finding it inhabited by fish-man hybrids.&#10;&#10;In each turn, a player can move its miniature by a space on the map, and do one of this action:&#10;&#10; explore: if it's the first time a space/room is entered, roll one die and place the monsters listed from a table,&#10; attack a monster: roll a die, add the bonuses, and if the result is higher than the level of the monster, the monster is killed; if all the monsters in a space/room are eliminated, roll one die and take the treasures/money listed from a table,&#10; use a special ability/object.&#10;&#10;&#10;After the turns of the players, the monsters attack every character in their space; a player roll a die, add the bonuses, and if the result is lower than the level of the monster, the monster inflicts a damage (physical, mental, or both) on the character.&#10;The players can leave the map and go to the city to buy additional equipment, but the time spent is added to a track, and the game becomes harder if too much time is spent in this way. If a character is defeated (the inflicted damage is equal to its physical or mental resistance) is forced to go to the city.&#10;The game is lost if all characters are defeated in the same round, instead the game is won if the players finds all the clues and keys that open the way to the final boss (Dagon), and succeeds in defeating him.&#10;&#10;