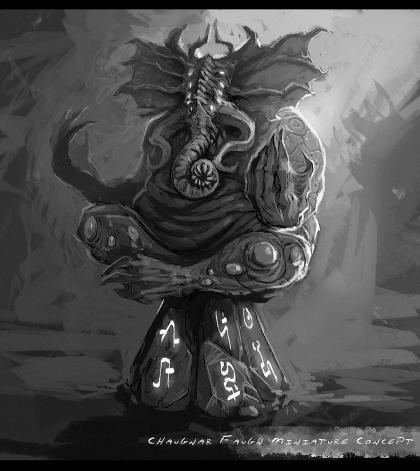 Ah, the infamous proboscidian godlet. Chaugnar Faugn gives you the ability to alter the way the Elder Signs work (to your advantage). In addition, he provides you with a new action:

Miri Nigri (Action: Cost 1) select an Area in which you have units. A battle immediately begins there. All your Cultists in the Area add +2 to their Combat.

This is a valuable defensive ability (though of course it can also be used offensive, under some circumstances). If someone marches a critter into your Area, hoping to capture some cultists or otherwise make trouble, you can drive him right back out again. The Miri Nigri action is particularly useful for Black Goat (whose Cultists already get some Combat power via her Frenzy spellbook) and Yellow Sign (whose Cultists tend to cluster together in large groups).

On the other hand, his spellbook Curse of Chaugnar Faugn is actually way better for Great Cthulhu and Crawling Chaos, because it messes with the way Elder Signs work, and generally Black Goat and Yellow Sign are the factions who most rely on Elder Signs.

So this is a Great Old One whose specific use differs depending on which faction takes him.