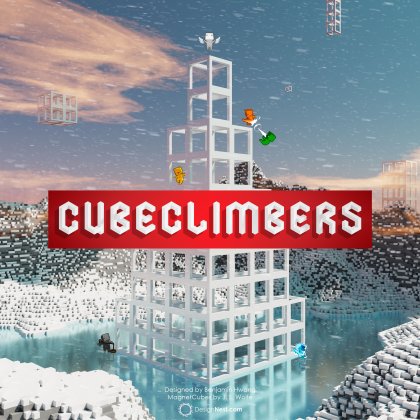 CubeClimbers is a strategy game for 2-4 players where you compete for the highest spot of a mountain by stacking MagnetCubes, pushing opponents, using grappling hooks, and unleashing superpowers. With precision, ingenious tactics, and a dash of luck, you might just claim the top!&#10;&#10;CubeClimbers features MagnetCubes which are elegant building blocks that magnetically snap together. Building with them results in a dynamic playing field with unique 3D board states every turn. Players start on a base of prearranged cubes. Each player is then dealt an even and equal number of the remaining cubes. Players are also dealt 2 of 16 unique asymmetric player powers that can each be used once a game.&#10;&#10;During their turn, players BUILD 2 cubes, MOVE to an adjacent space, and ROLL. Rolling gives players a chance to reposition with the grappling hook or push all players in a direction of their choice with wind. Players must perform all three actions once in any order to end their turn and may also use their powers as optional actions. The game keeps going until the player who builds the last remaining cube ends their turn.&#10;&#10;The player at the highest level of the mountain when the game ends wins!&#10;&#10;