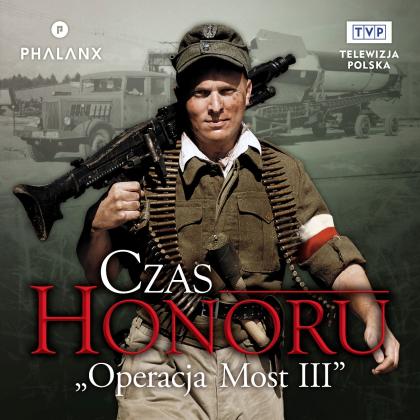 German occupied Poland, 1944. Beyond the reach of Allied intelligence and bomber commands, the Germans establish a secret facility, where a terrifying weapon is being tested. V-2, Hitler's Wunderwaffe, a ballistic missile able to wipe London from the map and win the war, bringing Britain to her knees. But the deepest secrets of German war technology are revealed by the UK's staunchest allies - the Poles...&#10;&#10;Czas Honoru: Operacja Most III &ndash; a.k.a. Days of Honor: Operation Wildhorn III &ndash; is a fast-paced, tactical card wargame for two players. The first player takes the role of the Polish commander. His goal is to collect fragments from rockets test-fired from the German missile base. The second player takes the role of the German commander and is trying to protect the secrets of the rocket testing area.&#10;&#10;The game lasts four turns. Each turn begins with a missile test, which scatters new fragments of the rocket in the peripheral area surrounding the testing ground. Players alternately take turns during which they place their units on the table and perform actions. Players use scouts to collect missile fragments, but they need to be protected by soldiers and partisans because enemy contact can lead to combat. These actions are supported by elite units: Polish Unseen and Silent commandos and German SS Stormtroopers, who are able to penetrate enemy lines. In addition, players build a network of command and support units, which allows them to effectively carry out their actions.&#10;&#10;Players also affect the course of the game during their opponent's moves, playing cards for immediate effects. And each side has a set of unique events, e.g., Germans can use their logistical advantages while Poles can hide, and even evacuate rocket fragments to England! To determine combat and exploration results, players each use a six-sided die, but they have many opportunities to modify the results, so a good plan should work even with bad luck.&#10;&#10;At the end of the game, the player with more rocket parts wins. This means the player successfully stole (Polish) or concealed (German) the secrets of the V-2 weapon.&#10;&#10;