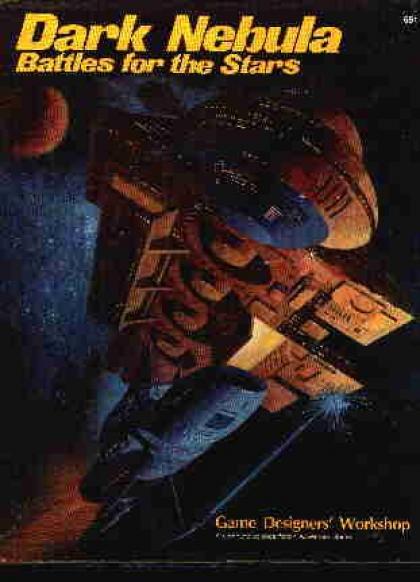 Dark Nebula has 8 Small boards representing sectors of about six or so star systems. The boards are placed randomly at the start of the game by both players one at a time, to their own advantage. The game is played in turns with each player's turn having a number of phases. Get the money you earn from your star systems, move your ships and combat, a reaction from your opponent (which has some restrictions), a final move and combat by you, then it is the other players turn.

The object of the game varies with the board placement, but basically you need to control your opponents home world for a number of turns..

One of GDW's Series 120 games, a line of introductory wargames spanning various historical eras. The games in the series had 120 counters and were supposed to be playable in 120 minutes or less, hence the name.

The game plays quite fast because the rules, while badly referenced (typical of GDW), are quite straight forward (medium simple). You need to get some card and mount the boards, but the boards themselves are nice enough. The counters are standard fare, but have no printing on the back to show disrupted units.

The system is based on that used in Imperium.