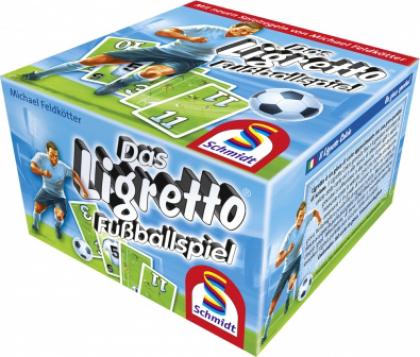 Das Ligretto Fußballspiel combines the quick card play of Ligretto with Europe's favorite sport. To win the game, a player or team must be the first to score five goals.

To set up each match, players shuffle their deck of sixty cards, their goal cards, and the communal set of 24 field cards. They lay out five fields cards in a row to create the playing surface; each field card has a number on it. Each player randomly chooses one of his goal cards and places it face-down at one end of the field. Each goal card has a 1 on it. Players then get their cards and wait for the whistle.

When a player reaches the opponent's goal, he flips over that goal card to reveal a picture of a goalie and a ball entering the net. He then needs to mix together all of his discards and played cards, flip them over, and start looking card-by-card for four cards that can be fit together puzzle-style to resemble the picture on the back of the goal card. The first player to do this scores a goal and keeps the opponent's goal card; if he made a mistake anywhere, he scored an own goal, so the opponent gets a goal card from him.

Players then shuffle the cards and go at it once again. The first player to score five goals wins!