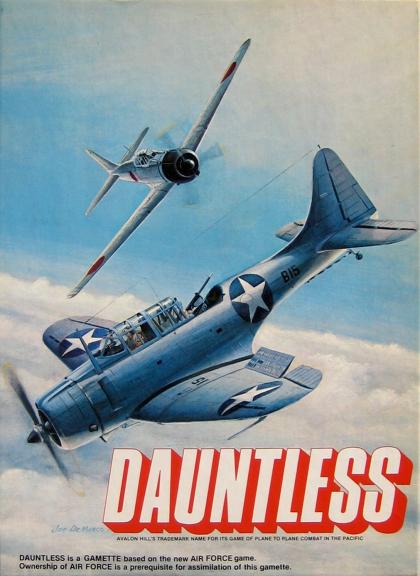 A game of tactical-level WWII air combat in the pacific. Originally published as a stand-alone game by Battleline, Dauntless was later (1981) republished by Avalon Hill as a gamette expansion for the game Air Force. AH added rules for ships and anti-ship weapons, carrier operations, and rockets.

From a Battleline catalog:

DAUNTLESS takes our proven and popular AIR FORCE game system into the skies of the Flying Tigers, Samurai and the "Black Sheep." The new airplane data charts let you put such renowned aircraft as the P-38 "forked tailed devil," the incomparably nimble Zero, the aptly named Black Widow, and the awesome B-29 through their paces. Other veteran war birds include the P-40, Corsair, Val, Kate, Frank, B-25, the SBD (Slow But Deadly) Dauntless, and many more.