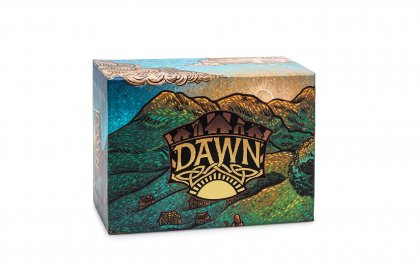 Players try to build a village together. As the game goes on each player secretly chooses whether they want to go for a coop victory or a single-player win.&#10;&#10;Set in ancient northern Europe, Dawn blends strategy with unique player dynamics. As the town is being built there are threats that players need to decide if they want to fight. In the midst of this players have to also deduce who is helping and who isn't.&#10;&#10;The game is played over the course of six rounds. Each round consists of three phases. First, players draw cards until they have nine in their hands, then they select one to put in their storehouse. During the second phase, each player plays their cards to either: perform and action (such as heal another player, or spy on a threat), try to build a building by playing a resource card face down in front of it, or try to thwart a threat by putting a card face down by those. Finally, there is the resolution phase where the cards played face down are shuffled and revealed to see if a building has been built or a threat has been thwarted.&#10;&#10;At the end of the game, it is revealed who is a coop player and who was going for a single-player victory based on the amount of treasure each player has stored in their storehouse. There needs to be thirty prosperity-points worth of buildings built for each coop player or the coop players fail. If they fail, then the player with the most treasure stored in their personal storehouse wins the game.&#10;&#10;Dawn is the next game in the Darkness four-part saga. Where Darkness represented players competing for limited resources, as they would during &quot;dark times&quot;, Dawn represents what happens when people choose to work together. The next game, &quot;Daylight&quot; will be a pure coop game, and finally &quot;Dusk&quot; will be a legacy game.&#10;&#10;-description from designer&#10;&#10;