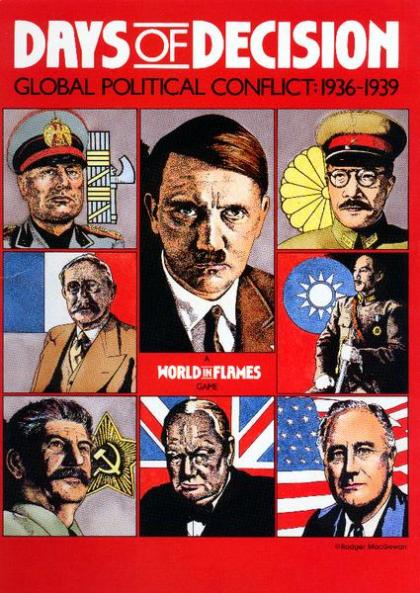 Days of Decision II is a strategic level game about the politics and conflicts that created the Second World War. The period covered is 1936-46, and the players can make (or choose not to make) many of the decisions that led to the war.

The game is very detailed in its political aspect, and is more a political game than a wargame. Each country affected by the war is represented on an "ideological" chart which tracks the movement of the powers into the different spheres of influence: Fascist, Communist and Democrat. Where each country lies on this chart is vital to which country controls their decisions and forces. Political decisions are chosen from a large array of IPOs (International Policy Options) and a number of Political Options available only to the country that you're playing.

The game is based on the original Days of Decision (I) but is almost a new game. The old one had 4 million possible outcomes, this one has over one hundred trillion (according to the game designer).