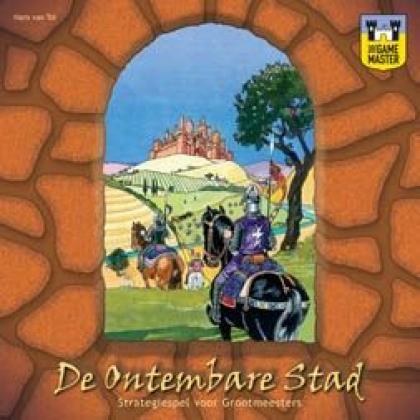 De Ontembare Stad (English translation "The Indomitable Citadel") is a family board game in which five Grand master erect new buildings which helps the growth of the small town into a large Citadel of great importance.

You are one of the five Grandmasters, leading an order of knighthood, and you help to build up a Medieval Town to become a Citadel with beautiful houses and buildings. You can influence your own progress in the game. A special feature in this game is the Influence Card, which gives you the chance to counter your opponents. You can take new territories, take over territories of other Grandmasters or create disorder in the citadel by burning down an important building on the board.

In the game you are striving for the strongest influence, which enables you to become king. The strategic variant of the game introduces the Grand Power in one of the four different development areas. Also the isolation of territories increases the fun for the more experienced player of strategy games.

The game is originally in Dutch but a German version is available. An English version is not available, but rules and card translations are available on the website of the publisher www.thegamemaster.nl (set language to english)