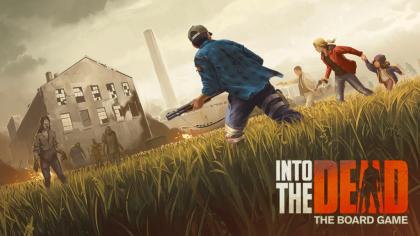 Into the Dead is a competitive game (or can be played cooperatively) of strategy and risk-taking in which players take the roles of survivors and their loyal canine companions to navigate a landscape teeming with hordes of the undead. By gathering supplies, killing zombies, and reaching safety, players show their aptitude for surviving the apocalypse through the completion of missions and collection of survival points.&#10;&#10;In more detail, players take turns acting as both the zombie horde and the survivors of the apocalypse. The winner is the player with the most survival points, and these are acquired by completing survivor missions, reaching safety, and increasing their zombie kill count. Once per round, a zombie master rolls dice to spawn and move the dead toward any survivors nearby. Then each survivor must weigh the choices of completing missions at personal risk, running toward safety, gathering supplies, and more. By using the cards from their starting hand and those acquired at the various supply drops on the board, they can increase their movement speed, lob grenades and fire weapons, and direct their trusty canine companion to attack the threats facing them. Dice rolls determine whether a nearby zombie will bite and the level of damage a weapon will deal, making the game a balance of risk and strategy.&#10;&#10;Cooperative Play allows 2-4 Players to make the the run to the farm in the same way they would in the normal competitive mode but with the exception of working together with the other Survivors as opposed to against them. In Solo Play, a single Player can control from 1-4 Survivors during the run, taking on the run with a solo Survivor being the greatest challenge.&#10;&#10;Survivors will be able to work together, planning strategies for Missions and trading Supply Cards with each other along the way. Additionally there might be a few other special ways Survivors will be able to aid each other during Co-Op that aren&rsquo;t normally available in the core version of the game.&#10;&#10;

Recensioni su Into the Dead Indice ↑

Eventi riguardanti Into the Dead Indice ↑

Video riguardanti Into the Dead Indice ↑