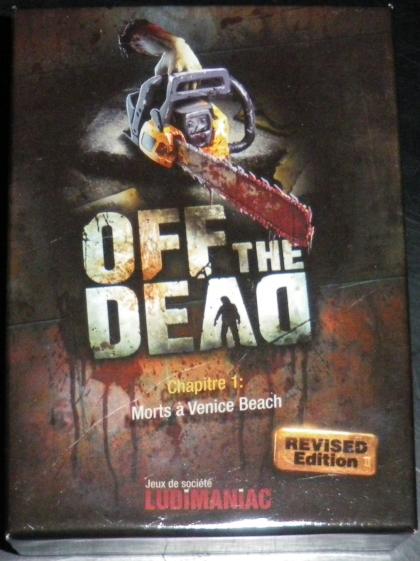 Off the Dead
Chapter 1: Death in Venice Beach

A deadly virus has spread across the world, only leaving behind decomposing corpses, animated by an irrepressible desire for fresh meat. Everywhere, members of the population spared by the epidemic group together to fight against the plague and increase their thin chances of survival against the hordes of undead.

With Off the Dead, play as one of these survivors facing the zombie invasion. Search rubble, organize your defense, eliminate zombies and abobe all, do not leave your companions behind, because once infected they may well join the ranks of the enemy.

In a world inspired the greatest genre films, Off the Dead mixes shivers, cooperation and individual strategy, altogether in a deliciously crazy atmosphere.

Mechanics:
The goal of the game is simply to kill all the zombies that are drawn from the deck and lose as least human players as possible.
Each player plays as follows during his turn :
1. Action #1 (attack a Zed, search for an item OR give an item to another player).
2. Zed action (they are generated, they advance and infect player).
3. Action #2.
4. Infection (counter incrementation : after 4 steps, player is out).
Player attacks are solved by a die roll with weapon modifier.