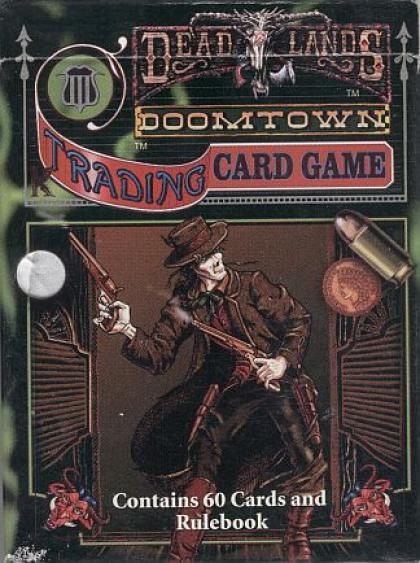 One of the more unusual collectible card games on the market, Doomtown has players taking the part of gangs, called 'outfits,' trying to gain control of the California boomtown known as Gomorrah, in the same Weird West setting as the popular Deadlands RPG. A player wins at the end of a turn if he or she has more victory points + control points than any other player.

Doomtown is set apart from other games in CCG market by its unique poker-based combat resolution, as well as by the way in which the town is built up through the game by the use of Deed cards. Outfits range from the good-guy Law Dogs to the mysterious Sioux Union to the nefarious Whateley clan.

A turn is played out over one "day".
In the gambling phase players play a hand of "Lowball" ( Unlike other Doomtown poker hands, the lowest hand wins.), to determine who will go first for the rest of the turn.
Next in the upkeep phase, income is collected and upkeep for Dudes from another outfit are paid for.
The next phase is "High Noon", during this phase, shopping and trading, moving, acting and calling out (all specific actions related to the game play) are taken.
Finally, there is the Nightfall phase, during this phase, the events of the day are discarded, players hands are replenished and cards are returned to their "ready" state.