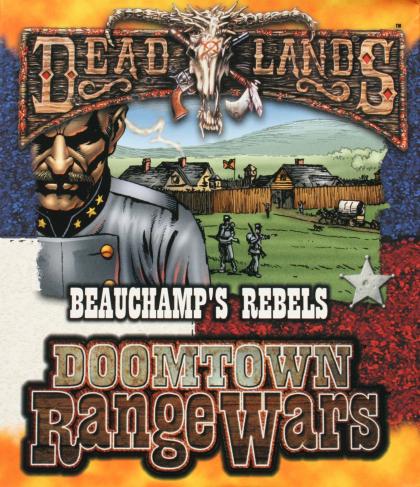 Doomtown: Range Wars is a customizable disc game. Each of the boxed sets contains 8 sheets of die-cut discs which may contain an assortment of combat markers, weapons and ammo, spells, cowboys, supernatural adversaries, terrain, buildings, and more. The starter set also includes a rulebook, and everything needed to play. These sets were produced in 2000 by Fantasy Flight Games, and are set in the Deadlands game world of the wild west (but there are other themes that use the same disc mechanism).

This game uses full-color illustrated discs to represent the cowboys, supernatural beings, buildings, and other accessories used in the game. The discs are used to wage gunfights and large-scale western battles. The discs each have game stats such as: pistol/rifle skill, hand-to-hand combat, movement, leadership, wounds, and special abilities which can help or hinder combat. This game is similar in style to many military wargames, except that the counters are much larger (1.5 to 4 inches in diameter!), allowing for amazing full-color unit illustrations, and detailed special abilities like those seen in fantasy card games.