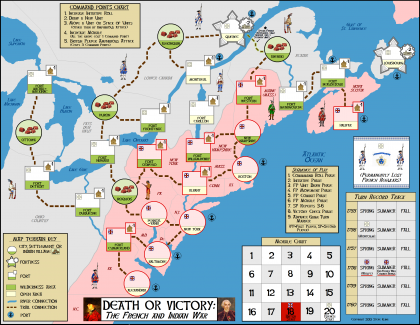 Death Or Victory: The French and Indian War

Simple strategic game on the French and Indian War. Point to point movement. Actions other than movement are controlled by command point dice or chits subject to some special moves limitations. Players recruit combat units, move units and conduct combat during alternating game turns. Units include regulars, militia, indians and rangers. Special rules provide additional historical flavor and provide some historical constraints faced by each side. Victory is attained by capturing certain locations of the opponent or by reducing the opponents morale level to zero.

The goal was to build on concepts of the One Page Wars effort by Alex Kremer and Mark Goss with a little more chrome and history, a little more complexity and a slightly larger map, but still playable in a small format. Think a Small Map Wars series.