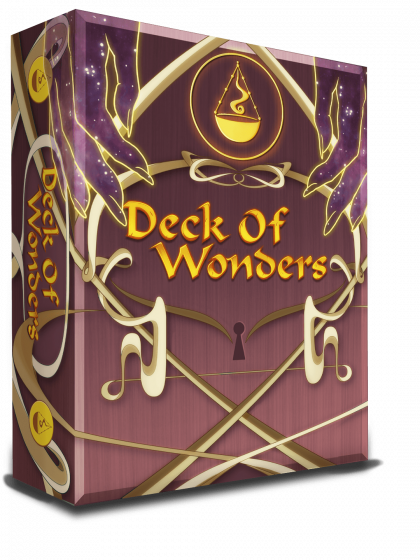 Deck of Wonders is a solo-first expandable card game with legacy elements. It captures the feel of games like Hearthstone and MTG, but in a solo/co-op format.&#10;&#10;The object of the game is to defeat the various Villains that challenge you for the Deck of Wonders by turning their own spells and minions against them, while enlisting the support of magical creatures and powers of your own.&#10;&#10;The story is that you&rsquo;ve stolen the Deck of Wonders from Fate herself and, as you make your escape, all manner of magical creatures start coming out of the woodwork to both help and hinder you. Chief among these are Fate&rsquo;s Villains, who are hunting for the Deck of Wonders at her command (or perhaps for their own selfish reasons).&#10;&#10;When the game starts, you select the Villain you want to face off against. Each Villain has a set of special rules you MUST follow and a set of cards that you MUST use in your deck as long as you're facing them. To their cards you add additional cards from your Collection, which forms the deckbuilding challenge of the game: what cards should you add to the deck that can take advantage of the special rules, and combo with or counter the Villain's cards?&#10;&#10;All these cards go into the same deck, which you and the Villain take turns drawing from. This works because each card has two halves: one to use if drawn on the Player turn, and one to use if drawn on the Villain turn. The Villain halves are stronger, faster, and more powerful than yours (Fate is on their side after all), but they will attack mindlessly following a simple set of rules called the Priority System. It's up to you to outplay the stronger Villain by manipulating the Priority System and leveraging the synergies of the deck you've built!&#10;&#10;As you defeat Villains and progress in the game, you will unlock special legacy packs. Each legacy pack will have special cards that alter the play experience in surprising ways, forcing you to change your strategic approach. Once a Villain is fully defeated, you can add their cards to your Collection for use against other, more powerful Villains. You may even unlock special, permanent upgrades for your cards! You&rsquo;ll need every bit of help you can get to stay in front of the difficulty curve, and the choices you make around what to upgrade turn your collection into a unique representation of your decisions and play style.&#10;&#10;&mdash;description from the designer&#10;&#10;