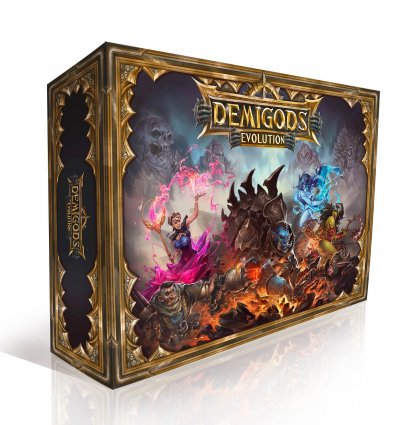 Demigods Evolution is a skirmish-style board game for 2 or 4 players in which they take the roles of demigods, commanding armies of heroes to prove supremacy over others and ascend as the new God of War. As a demigod, a player initially has access to 24 heroes from which he can choose his army. With his choice he then faces his opponent(s) on sacred battleground.&#10;&#10;There are different game modes regarding picking heroes (chieftain, random, mirror, free pick mode), and regarding conditions on which victory is achieved (skirmish, tactics). It is the game that relies heavy on tactics, that is fairly simple to learn but hard to master and that has a great replayability.&#10;&#10;In time of Chaos, the God of War was supreme ruler over all other gods. But Time of Peace came, and lasted so long that God of War started to lose his power. He grew weaker as the years went by and was pushed to the side by other gods. When his power faded so much that he felt that the end was near he gave the task to his four sons, the demigods, to try to prove themselves as best commanders in the field of battle. The one who can emerge victorious should become the new God of War and bring back the former glory to their name.&#10;&#10;Gather your heroes, challenge your friends, become the God of War!&#10;&#10;