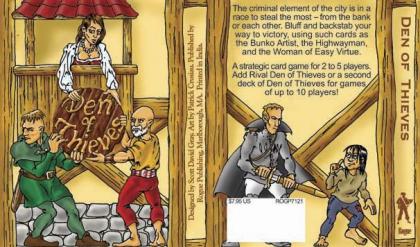 Den of Thieves is a strategic card game for two to five players. The criminal element of the city is in a race to steal the most -- from the bank or each other. Each player controls one of the dens, and each card in her/his hand represents one of the thieves in his/her den. Each player chooses which of her/his thieves to make active, knowing which thieves are in every player's den (and knowing that they know which cards s/he is choosing between). Guessing which thief another player is making active can help block and/or steal from that other player. Players bluff and back stab their way to victory, using the lower class thieves in the city -- including the Pickpocket, the Urchin, and the Woman of Easy Virtue. The game can be combined with Rival Den of Thieves for richer play. The game can accommodate 2-5 players -- up to 10 with a second deck or Rival Den of Thieves added.