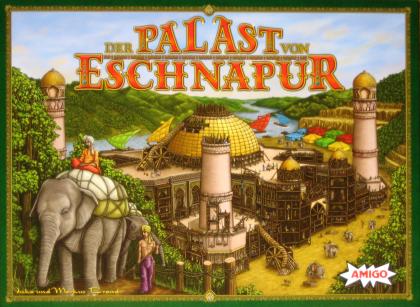 2 to 4 players try to build up a palace consisting of 8 parts from which only up to six are used.Players bid with gold cards to bribe officials called Maharadschahs and then activate special actions in order to collect material for propping up the palace. Each player has her own player sheet to set the gold cards. There are 5 special actions. For each action one gold card is laid out. Whoever has played the most valuable gold card for each action is awarded the turn action. All other gold cards left over can later on be exchanged for victory points. Later on players can participate in building parts of the palace. There are some special bonus cards as well. You get them by sacrificing victory points and have only one time use.Additional support is earned by laying down material to so called premium award fields at the palace. Players receive victory points after having build highly prized palace places or by exchanging played gold cards for their single actions.