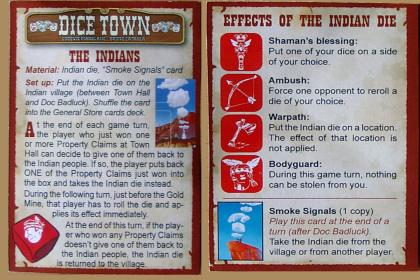 Give back their territories to the Indians and win their favor. The Indian Dice determines how the Indians will help you: The Shaman's Blessing can change the face of one of your dice, with the Ambush you force an opponent to revive one of his dice, with the Path of War you shadow the effect of a place, the Bodyguard will protect you a turn against theft ...

Bruno Cathala has confirmed that this expansion will appear as part of a full Dice Town expansion, set for release in 2011.