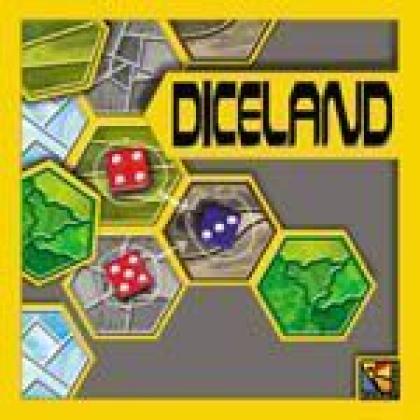 DICELAND is a strategy game for two players. At the beginning of the game, both players must agree on the number of hexagonal tiles that will form the “land” to be conquered. Beginners can start playing with few hexagons, while experienced players can use the complete set of 36 tiles. The dimension of the “battlefield” determines also the number of dice used by the players. In this game, dice are used as a sort of “soldiers” who will “fight” to conquer “Diceland”, although the game is definitely not a war game. Rules are very simple, and although the players have to roll a lot of dice during the game, only a good strategy can lead to a winning position. DICELAND can be played at different levels: the basic one will take only few minutes to be completed, while the most advanced can offer up to 45 minutes of entertainment, introducing the special terrain rules. The rulebook comes in 5 languages, full of pictures and with many game variants.

I've tryed it in Essen in 2005
This game is without any interrest... for me at least!