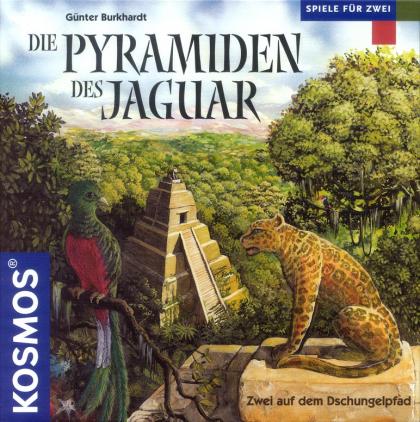 Players build a pyramid using 40 numbered cards, taking care to construct the pyramid with the lowest value card at the bottom left, and the highest at the top. This is done by each player, in turn, offering two cards from their hand. The opposing player takes one of the two for his/her pyramid, leaving the other for the first player to put on their pyramid. Cards already on a pyramid can be covered once (after that they are covered by a jaguar stone), an action that triggers movement along the jungle path (scoring track). Certain steps on the path also contain events that can alter construction of the pyramids. The person who completes their pyramid first gets extra steps along the path. The round ends when a player has completed his pyramid, has only one or zero cards left in hand or when either player cannot legally play a card. After each round the top card of the draw deck is revealed - if the number on the card is lower than the position of the explorer that won the last round than that explorer has won, if not another round is played.