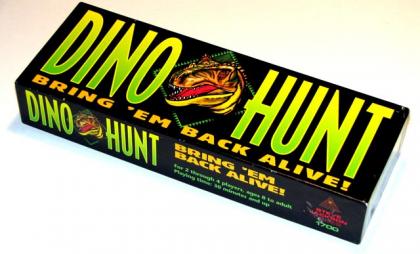 A collectible card game from Steve Jackson aimed directly at the kids.

The core game comes with everything you need and boosters just add more options. Each player gets 10 action points each turn to go back in time and collect dinosaurs. You start your turn by rolling a die and putting out that many new dinos for hunting. You travel to different time periods and hunt the dinos by rolling a die and comparing the total to a list on the card. A good roll allows you to capture the dino but a bad roll can have other consequences including ending your turn prematurely. Each dino cost variable action points to hunt and moving from one time period to another also costs action points. You also collect various items that can help you and there are action cards that have good and bad effects. When the stack of dinos has been exhausted and all dinos have been captured or have escaped the game is over. Whoever has captured the most dino points wins.

The beauty of this game is not in game play but the cards themselves. There is a large picture of the dinosaur and enough info to put a reference book to shame. As a bonus there is also a phonetic spelling of the name. Without the special cards this game can be played by 5 year olds with a little help.