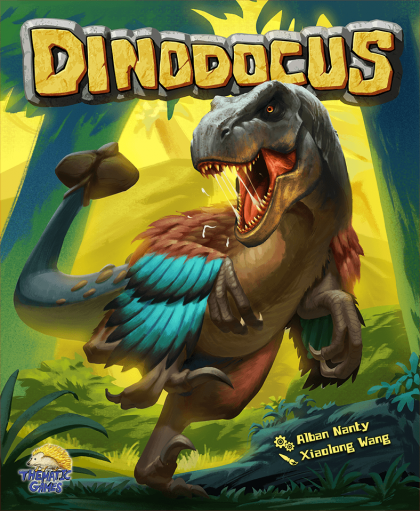 Dinodocus is a card game for 2 to 6 players that plays in 45 minutes, in which players assemble dinosaurs strong enough to resist for long periods of time.&#10;&#10;In Dinodocus, players will create and modify dinosaurs using cards depicting dinosaur body parts similar to an identikit. On top of these body parts, the cards also carry dinosaur name syllables and attack and defense values. The syllables creates specific names for each of your dinosaurs, whereas the attack and defense value give strength to your dinosaurs.&#10;&#10;During your turn, you first draw dinosaur body part cards, then you create new dinosaurs or modify any dinosaur on the table, and then you feed your dinosaurs. Herbivores will share a limited pool of vegetation tokens, while carnivores will hunt other dinosaurs. Your dinosaurs that couldn't find a food source will go extinct. The longer can survive your dinosaur species, and the more victory points you will get.&#10;&#10;During the modification phase, a lot of negotiation, intimidation, pleas, bluff, will appear to convince the current player to modify other players' dinosaurs, not yours!&#10;&#10;&mdash;description from the designer&#10;&#10;