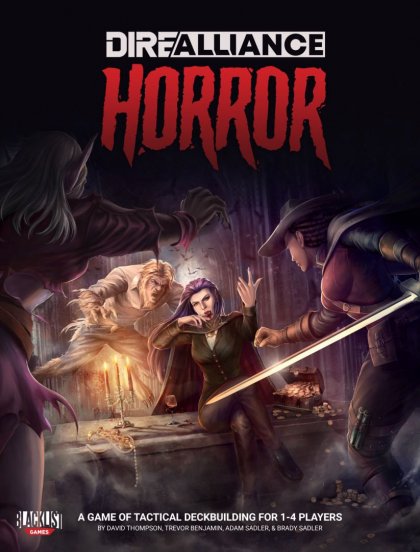 Dire Alliance: Horror is a game of tactical deckbuilding for 1&ndash;4 players. Designed by Trevor Benjamin &amp; David Thompson (Undaunted: Normandy, Undaunted: North Africa) and Adam &amp; Brady Sadler (Street Masters, Heroes of Terrinoth), Dire Alliance: Horror is set in a world of classical horror and is the first title in the Dire Alliance series of cross-compatible games.&#10;&#10;There are two ways to play Dire Alliance&mdash;Battle Mode lets 2 players go head-to-head as you attempt to best your opponent's chosen faction and leader with your own chosen combination of faction and leader, while Raid Mode allows 1 to 4 players to work together to take down an A.I. controlled enemy and its minions before they achieve their nefarious goals. In both game modes, players use a hand of cards to make their fighters move, battle, gain new cards, and perform special abilities. Players can only win by accomplishing the goal as described on the chosen scenario sheet!&#10;&#10;Featuring fast, deck-driven gameplay, two ways to play, and the ability to mix and match different fighters and factions from across the product line, Dire Alliance lets players create their own stories of conflict and fragile unions across multiple genres!&#10;&#10;&mdash;description from the publisher&#10;&#10;