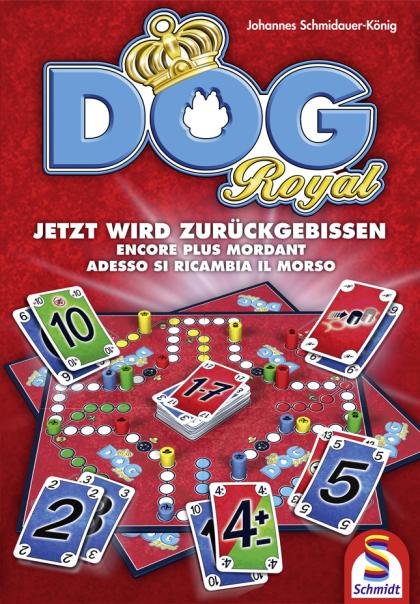 Dog Royal plays like its predecessor Dog in that the object of the game is for a player (or team) to move his (their) tokens from home to the target area as quickly as possible. Tokens are moved in a clockwise direction along the track on the game board according to the value on the cards played. The first player or team to move all of its tokens to the target area first wins.

What distinguishes Dog Royal from Dog are two twists: First, Dog Royal includes a number of special cards not present in the previous game. You can move 1-7 spaces, switch the location of two tokens, draw one token to another like a magnet, equal the value of the card previously played, and more.

Second, each of the four tokens controlled by a player bears a symbol – king, knight, citizen, jester – and each such token has a special power. The king, for example, cannot move more than seven spaces on a turn, so all cards with a higher value cannot be used to move the king, but the king cannot be bumped off the track by any token other than another king. (Players can choose to keep the symbols face-down and treat all tokens the same, if desired.)