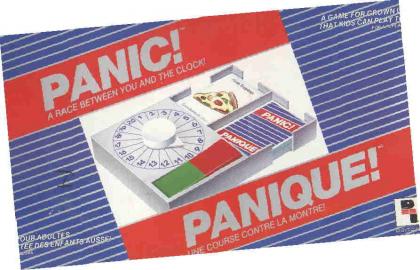 The Name a Lot On the Spot Game.

Game consists of 6 rounds and a bonus round. In Round 1, the guesser sets the timer, the announcer draws a card and announces the category. The guesser must name 3 things in the given category like things at the beach for example. The timer is stopped as soon as the guesser is able to name 3 items that fit in the category. Their scoring peg is moved ahead based on where you stopped the timer (labeled 1-6). In Round 2, name 4 things and so on. For each round, the peg is moved ahead according to the number on the timer.

The final round is the lightning round. The guesser starts the timer and the announcer gives the category. The guesser must name 2 things for the given category. Once completed, the announcer sets the card aside, a new one is drawn, and the category is announced. Once again after 2 items have been named, the card is set aside and a new one is drawn. This continues until the timer stops. One point is given for each card completed. The scoring peg is moved accordingly.

The player with the most points is the winner.