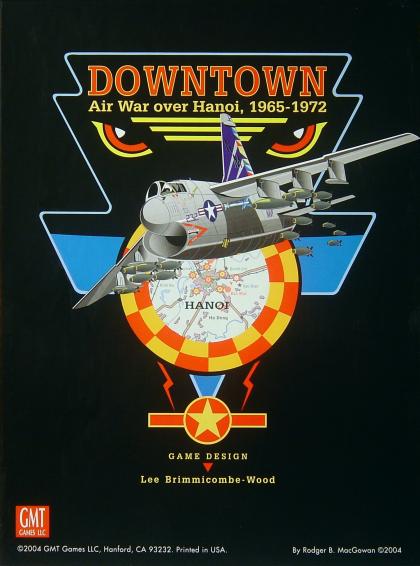 DOWNTOWN is a game of air warfare over Hanoi. During the Rolling Thunder (1965-68) and Linebacker (1972) campaigns, Hanoi and the Red River Valley was the focus of American air operations intended to pressure North Vietnam's Communist leadership into ceasing their attacks on the South. Against large "packages" of US attack and support aircraft, the Vietnamese deployed a formidable array of anti-aircraft artillery (AAA) and Surface to Air Missiles (SAMs). They also had a force of MiG fighter jets.

Covering air operations from 1965 to 1972, Downtown simulates the clashes between American air power and the North Vietnamese air defence system. The United States player controls Air Force and Navy strikes into Route Packs 5 and 6 - the heart of the Vietnamese defences.

Packages include forces of bombers, fighters, recon planes, jamming aircraft and "Iron Hand" aircraft for suppression of enemy air defenses (SEAD). The US player's objective is to destroy ground targets. They can only succeed by integrating all the package elements to complete the mission with minimal loss.

The North Vietnamese player controls concentrations of AAA, Fire Can radar-directed artillery and SAM . They can launch MiG fighters to intercept the bomber streams aimed at 'Downtown' Hanoi. The Vietnamese player must disrupt enemy attacks.