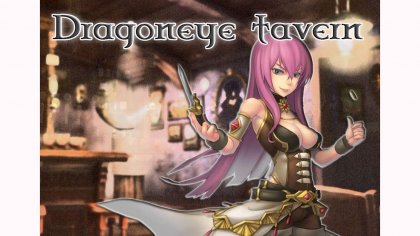 Dragoneye Tavern is a casual game set in the Fantasy world of Askrias for 2~4 players, and of all ages. Players play a role of an adventurer, enjoying the night in the taverns after their adventures, but of course drinking and eating everyday is not the only thing they do! So, grab a seat and experience one of the favorite game among the adventurers in Dragoneye Tavern and the whole of Askrias.&#10;&#10;Players will take control of a Character, and equip themselves with Shard abilities from the ability decks, and play in a fantasy version of Poker Dice with other players! The game comes with 20 custom dice and 72 game cards.&#10;&#10;Each player's main goal is to earn the most shards, but this is no ordinary game, everyone knows that, dirty tricks are always used when played in a Tavern! During the game each player will be able to use their tricks to disrupt other players from getting the best hands, but at the same time they will be doing the same to you! So, never play fair, and use your wits to be the best!&#10;&#10;