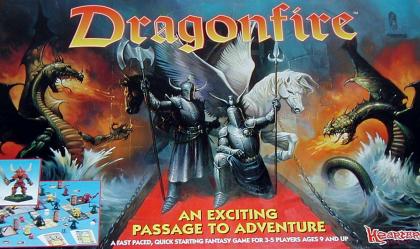 Dragonfire was an attempt by Target/Heartbreaker to entice young adults into roleplaying, by means of devising a crossover between a roleplaying game and a fantasy miniatures boardgame similar to Milton Bradley and Games Workshop with their Hero Quest game system. This boxed game consists of 16 miniatures, various room and corridor tiles, cardboard doors with stand-ups, and some dungeon dressings represented by die cut cardboard pieces. The aim is to complete the task of each scenario given in the scenario booklet. One player is the Dungeon Master and sets up the rooms and monsters within when the other players reach them; the instructions are very specific about how to place the monsters, traps or items they encounter. Players are cooperative and do not compete against each other. Of course the players won't see the adventure booklet in advance or during the game, only the game master. All the players are knights of different colors (red, blue, green, and yellow). The same four colors are used for the plastic miniatures of: 4 orcs with bows, 4 trolls with clubs, and 4 Dragon Lords with swords.
Between each scenario may the players increase their rank, depending on how many points they have collected during the scenario. They get points depending on which monsters they have killed plus one extra for a successfully done scenario. In the Dungeons are there monsters, traps, magic items and other stuff. Overall, the designers do a decent job of making the scenarios entertaining given a limited amount material in the game. Each turn, a new event card is overturned and strange things take place. This is fun at first but becomes predictable in later games.
The dicing and combat system uses colored dice with different probabilities of scoring a hit - similar to Heroquest's Skulls and shields except that they are just circles on the dice and represent more of a yes/no answer when rolling. The game is slightly more advanced than Heroquest in that players can advance in levels similar to dungeons and dragons. As you increase in levels, you switch color of dice when attacking and defending, thus increasing your chances to score a "yes" or "hit" result on the dice. Otherwise the game is very similar to HeroQuest in general.
Heartbreaker Hobbies produced a couple of lead elf miniatures designed for use with Dragonfire. At the same time, they put out a rare poster/magazine called "Symmetry" #1 that included two new magic items for the game, stats for two elf characters, and a short scenario using all of this with the Dragonfire game. One would assume that consumer response was lacking given that no attention was given to the Dragonfire game in later issues of Symmetry and the game went into obscurity. Still, the game could be used for a couple of night's gaming, especially if introducing children to D&D style gaming or if one wanted to pirate the minis and room pieces to use with other game systems.