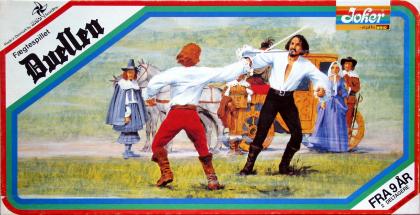 One player is black, the other white. The board is has 7x15 squares. Each player has 17 pieces with values from 1 to 6 in addition to a heart piece, which has a value of 1. Each piece can move diagonally or orthogonally up to the number on it. A piece can take an opponents piece by moving exactly as far as the number on it. One can place two pieces on top of each other, the double piece can then move a distance equal to the sum. A player wins when the opponents heart piece is captured or pieces with a total of 40 or more is captured.

Duell is fought out between two duelists on 105 squares that marks the battlefield. Each player have 18 pieces, of which one is the heart piece. The one who hits the opponents heart piece or knocks out a combined value of 40 of the opponents pieces, wins the game.