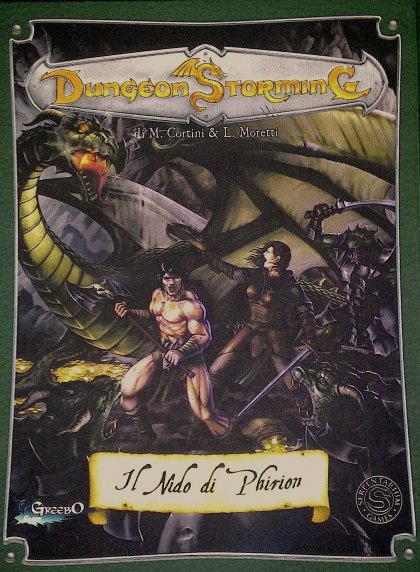 From the back of the box:&#10;&#10;&quot;Alone, in the depths of the dungeon, surrounded by monsters. A Barbar and a Ranger against a host of fierce Draconians. Rich treasures await you, with which you can get new weapons, armor, spells and scrolls. Will you become so powerful to face the Dragon Phitrion and become heroes?&quot;&#10;&#10;A collaborative game for two players or solo. It can be played with more players by combining two or more sets of Dungeon Storming!&quot;&#10;&#10;The game is played by moving the miniatures of your heroes on the map, room by room, battling the monsters with a simple roll of a die, dodging the traps, collecting treasures and magic objects, until the heroes reach the last room and try to overcome the boss monster (the heroes can exit the dungeon and buy new objects with the money found).&#10;&#10;The map and the layout of the rooms for this dungeon are fixed (all the tables for the encounters, treasures and magical objects are printed on it), but it can be played with four levels of difficulty.&#10;&#10;