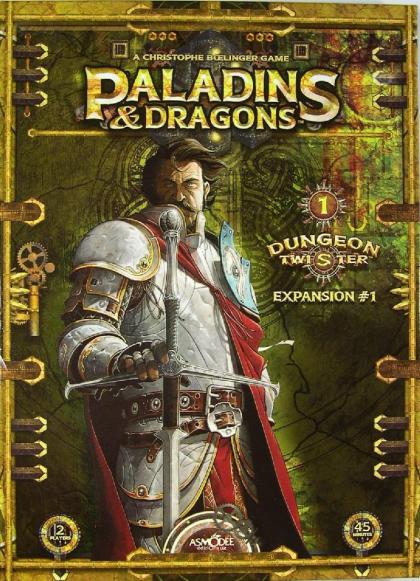 Paladins & Dragons is the first expansion in the Dungeon Twister series of games. For 2 players, this set brings you new characters, items and rooms. All rules from Dungeon Twister are still applicable when you play the expansion. A rulebook is included that describes the new content of the expansion.

The extension allows each player to innovate and to catch his opponent off guard by building a different team each time. Also, the 8 new rooms can now be chosen secretly by the players so that you know only 4 of the 8 rooms that you will encounter in the dungeon. You´ll have to build a fully polyvalent team to be able to survive the new surprises your opponent has in store for you.

New characters include:
The paladin : Can transport 2 items. Can use also the Dragon Slayer sword and the fire protection shield.
The Red Dragon : a strength 6 terror that just make ashes of you ! But he's too heavy to move and will bring 2 VP to the hero that kills him.
The Ghost : He cannot transport anything but can go through all terrain elements.
The Illusionist : He can create illusions of traps or boulder collapse to block his opponent or protect himself.
The Weapon Master : He's a high level fighter very competent with all weapons. He has such experience that most of the time, he can predict the movements and attacks of his opponents.
The golem : He's as slow as the troll, as strong as the troll but he cannot regenerate. However, he can smash down 3 walls during the game.
The Elf Scout : He's the fastest character with his movement of 7 and his ability to jump over pits. His strength 1 is a real weakness though.
The Pickpocket : He's specialized in stealing items from his opponent.

New rooms include: The Fountain of Youth, the cliffs, the pentacle room, etc.